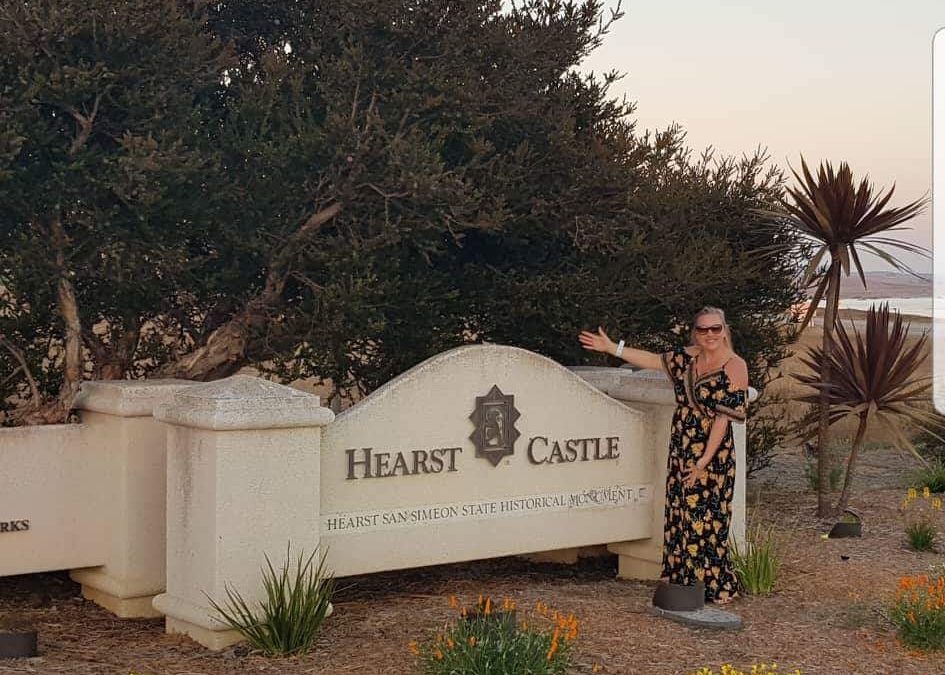 For nearly thirty years, I have dreamed of visiting Hearst Castle halfway between Los Angeles and San Francisco, in San Simeon, California. The castle is dedicated to the legacy of publishing magnate William Randolph Hearst.

As the bus starts it’s five mile climb up the hill towards the castle, and with the melodic tones of our automated tour guide accompanying our journey, I find myself wiping away a couple of very happy tears. You see, in my younger years I harboured the dream of Hollywood, bright lights, glamour. I was the child who practiced my Academy Award acceptance speeches, my pageant waves, and interview techniques. My heart lay firmly entrenched in the glitz and romance of life in black in white – of old Hollywood – the big studio years of the 30s and 40s. Where other teens had books and posters of pop bands and horses, I had biographies and pictorials of Greta Garbo, Joan Crawford, and Bette Davis. And it is through the extended reach of this era and community that I came across William Randolph Hearst, Marion Davies, and San Simeon. So, to finally arrive at this historic treasure was more than a little overwhelming for this now grown cinephile.

I had expected Hearst Castle to be visible from the Pacific Coast Highway as we approached, so it was surprising to have to search for it along the hilltops overlooking San Simeon Bay. But there it was in the distance, beckoning us to visit an altogether different California – one of opulence, art, enormous wealth, and rich history.

Hearst Castle was a social centre of old Hollywood between the 1920s through 1940s. Marion Davies, Hearst’s lover of thirty-four years, was an actress and guests at the castle included Charlie Chaplin, Buster Keaton, David Niven, Carole Lombard, and Errol Flynn among others.
Hearst formally named the castle “La Cuesta Encantada” (“The Enchanted Hill”), but usually referred to it as “the ranch.” Comprised of Casa Grande with a mere 115 rooms and three ‘cottages’- Casa del Mar, Casa del Monte, and Casa del Sol, Hearst Castles is more of a compound complete with a tennis court, an indoor Roman Pool, the outdoor Neptune Pool, and a private zoo. You can still see the occasional zebra roaming with the cattle if you’re lucky. There is a private airstrip still in use today for private guests on special occasions, and a ranch house at the base of the hill. The family still owns the working ranch surrounding the castle today, some 80,000 acres.

As for the rest of the estate, it was gifted to the State of California in 1958 by the Hearst Corporation. The castle itself is really a museum – preserved since Hearst left the grounds in the 40s due to declining health.
We had originally signed on to do just the Grand Rooms Tour at 5pm on a Sunday. Having driven down from Carmel-by-the-Sea, we were thrilled to arrive at a San Simeon void of sea fog, which had been our constant companion for most of the trip. The absence of fog meant the view from the upstairs rooms was now amazing and we were advised to take advantage and change our tickets, which we didn’t regret. I wasn’t prepared for Hearst’s incredible personal art collection that the castle and grounds were inspired by and built around.

Hearst had very few requirements of his Hollywood guests. They were free to do as they pleased during the day but were expected to attend dinner in the Refectory where, despite the antiques, silverware and crystal, Hearst preferred to use paper napkins and regular ketchup and mustard bottles. Guests were not to drink too much alcohol (it was monitored diligently, and those who chose to flout this rule were likely to waken the next morning to their bags packed and laid ready to leave), and then enjoy a movie in the theatre.

There are several different tours focused on different areas of the castle. The Grand Rooms Tour, which covers most of the ground level of Casa Grande, including the Assembly Room, Refectory, Billiard Room and the Theatre. The Upstairs Suites are where you get a glimpse into the glamour of the day. The numerous bedrooms and sitting rooms are a mix of 15th, 16th, 17th century art and artefacts, amongst art deco bathrooms and tilings. This tour also includes the enormous library, filled with Hearst’s personal collection of books, 150 Greek vases – all more than 2000 years old – and other precious objects. The Gothic Suite comprises the two bedrooms and private sitting room that Hearst and Marion Davies occupied, and the Gothic Study where he worked, editing his papers which included the San Francisco Examiner, the New York Journal, and the Los Angeles Examiner.

As we were whisked through the rooms, hallways and staircases by our knowledgeable tour guides, it was easy to become disoriented, and I couldn’t help but wonder if the many guests for whom sobriety was imposed upon them by their host, might not have been somewhat grateful at the end of the evening, as they navigated their way back to their sleeping quarters.

Popping up the top of an unfinished staircase we found ourselves in what was essentially a bell tower that had been converted into a stunning bedroom, named the Celestial Suite. Decorated in warm yellows, with the setting sun streaming through the unique windows with a view to the Pacific Ocean, I already had stars in my eyes when the tour guide informed us that none other than Clark Gable and Carole Lombard had stayed in this room. At this point, my husband handed me another tissue for more happy tears.

These unique rooms and views are the work of California’s first female architect and the designing force behind Hearst Castle, Julia Morgan. Morgan was the first woman to be admitted to the architecture programme at l’Ecole nationale superieure des Beaux-Arts in Paris, in 1898. Though best known for her work on Hearst Castle, she designed more than 700 buildings in California during her long and prolific career.
Among the assorted ballrooms, libraries and bedrooms, she created the Duplex Rooms. Essentially a very tall sitting room with a curved staircase leading up to a mezzanine bedroom. I began to wonder how I could stow away to stay a night or two in this magnificent beast!

There’s more than enough to fill a couple of days here so the following day, we returned for a different part of the house and to do the Cottages and Kitchens Tour. A disclaimer is required for the use of the term – ‘cottages.’ The largest of the three is Casa del Mar at 5,875 square feet. Casa del Monte and Casa del Sol are about half the size. Casa del Mar was originally known as House A and was home to Hearst, his wife Millicent and their family while Casa Grande was being built. Although she refused him a divorce, Millicent eventually lived her life separately on the East Coast, whilst Hearst and Marion Davies lived a life together on the West. It was to Casa del Mar that he often retreated, both he and Marion keeping bedrooms there, connected by an opulent sitting room.

On this tour, you also get explore the wine cellar, which tellingly was vaulted shut. Hearst had millions of dollars’ worth of art and artefacts scattered throughout the estate but chose to keep the liquor under lock and key, such was his disdain for inebriation in his guests.
This part of the tour included the kitchen which is unsurprisingly larger than some New Zealand family homes today!

Every detail and extravagance in the castle is overwhelming in its grandeur. Ceilings in Casa Grande are artworks in themselves and mostly date to the late 14th through early 18th centuries. The fireplace mantels are intricate – the one found in the Assembly Room was made in1560. Enormous antique tapestries dating back hundreds of years hang in many of the rooms. And just oh-so-casually dotted around are famous artworks such as Rest on the Flight into Egypt (Luc Olivier Merson,1879). Each corner and crevice you see are filled with fascinating sculpture and artworks, not to mention the architecture that holds it all together. Although not a part of any tour, the enormous basement houses numerous parts of Hearst’s vast collection that are not on display.

There is also a Garden Tour, but we declined to take that as our tickets already allowed us to roam the grounds and admire a few priceless statues – and a few replicas that Hearst wasn’t averse to owning. We found our way to the tennis courts, and indoor Roman Pool which sits under the courts. Although used less frequently than the Neptune Pool when Hearst was in residence, the Roman Pool is something to behold. Decorated from floor to ceiling with 1” square mosaic tiles coloured blue, orange and with flecks of gold inside. The opulence and indulgence of the place is like nothing I’ve ever seen before. So much grandeur amassed into one place, every nook and cranny filled with objects you’d normally have to visit numerous museums to see. And here this was, a residence, a home. That people lived and breathed and moved in and around it all at one time (though we were firmly reminded to “stay on the grey mats and not touch anything), is rather mind-boggling. It’s not often we get to see how ‘the other half lives’. So to stand in amongst it all and imagine what life was like there on the hill is quite something. Again, I wondered how I might avoid the bus waiting to take me back to the visitors centre and hide away for the night – or more. But then a private party was being set up, and our guide unceremoniously whisked me away before I had the chance to hide. Turned out, the guest of honour at the party that night was none other than Hearst’s grandson, William Randolph Jr. Now if only I could’ve swung an invite for that!!

TIPS: – Don’t be afraid of taking a tour later in the day/evening, when the days are longer and finer.

NB: – We flew Air New Zealand into San Francisco, and spent a few nights there, before driving down the coast to Carmel-by-the Sea which takes about four hours depending on how many stops along the Pacific Coast Highway you want to do. Then on to San Simeon and Hearst Castle, before continuing our journey to Los Angeles, where we flew home.